Noom isn’t supposed to be a diet. The app is a weight-loss program, yes, but it’s different: “designed by psychologists & scientifically proven to create real, sustainable results,” its marketing copy reads. If you’re sick of dieting, the ads say, Noom is for you. The personalized health-coaching company was founded in 2008 by two engineers, Saeju Jeong and Artem Petakov, and it took off when they released an app in 2016. It promises to teach sustainable health habits and mindful eating, and to improve your relationship with food and your body via an individualized program. For most users, the goal is weight loss.

Clearly, the message is resonating with people. According to Forbes, Noom has been downloaded more than 50 million times since its launch five years ago. In May 2021, TechCrunch reported that the company raised an astounding $540 million in Series F funding. (For reference, Peloton raised $550 million in the same funding stage in 2018.) It’s safe to say, Noom is huge and it’s going to keep growing.

But behind Noom’s popularity and slick “no dieting needed” marketing, it’s really just another diet. The app is essentially a calorie tracker supplemented by lessons on behavior change and a personal coach who messages you. Many nutrition and mental health experts have warned that the way Noom presents itself is misleading.

Earlier this summer, I signed up for the two-week free trial version of Noom (which then goes on to cost $59 per month or $199 per year). After downloading the app, I filled out an initial survey that asked for basic information like my gender, weight, lifestyle, goals, and food preferences. I input a weight-loss goal of 12 pounds, and it gave me a timeline suggesting when I might realistically meet that goal—about seven weeks. Technically, that’s in line with the one to two pounds per week that the Centers for Disease Control and Prevention (CDC) considers healthy.

I swiped my way through a welcome that included a few multiple-choice questions, including one that read, “What’s the best way to reach your weight loss goals with Noom?” The correct answer was “Simply believe.” I was also assigned a Noom coach, a woman named Laura, who sent me a message through the app’s chat feature, saying that she was there to provide support and answer questions. Then there were a few swipe-through lessons about Noom’s approach, which is meant to be flexible, intuitive, and motivating.

On day two, I opened the app and saw, at the top of the screen, a calorie goal for the day: 1,200. Given all of Noom’s talk of psychology, behavior change, and not being a diet, I was surprised that it expected me to track my calories at all. But I was more shocked by the drastically low recommendation.

“Our bodies need a bare-minimum amount of calories to keep us alive and keep our heart pumping,” says Danielle Bublitz, an anti-diet dietitian based in the Los Angeles area. That minimum number varies, but the Academy of Nutrition and Dietetics says that most women need between 1,600 and 2,200 calories per day, and most men need between 2,000 and 3,200.

I reached out to Noom as a reporter, asking for clarification on how it calculated my (extremely low) caloric allotment, and a representative told me that Noom bases the recommendation on user information, desired speed of weight loss, and principles from the Harris-Benedict Equation, a formula grounded in legitimate science and often used by health care professionals to estimate someone’s basal metabolic rate (BMR) and total energy expenditure.

For comparison, I plugged my height, weight, age, and gender into the Harris-Benedict Equation (widely available online) and got a BMR—the minimum number of calories needed just to function—of 1,486 calories per day—286 more than Noom’s recommendation. Factoring in my activity level, the online calculator added an additional 1,000 calories to my total energy expenditure, the estimated number of calories burned daily when activity is taken into account. Because my body mass index falls in the normal weight category, the CDC recommends no more than a 500-calorie deficit for weight loss—which meant I should be consuming about 2,000 calories per day. That’s 800 calories higher than Noom’s recommendation. (The CDC also points out that even “healthy” weight loss typically plateaus after six months, and most people end up regaining any weight lost.)

I wondered whether Noom’s caloric recommendation was more accurate for others, so I posted about it on social media. Several dozen women messaged me saying that Noom had prescribed them the exact-same caloric goal. Many of them also shared their height, weight, and age—our weights ranged more than 100 pounds, and our ages spanned three decades. It’s hard to fathom how all of us could have legitimately ended up with the same recommendation.

I asked Noom about this, and a representative told me over email that 1,200 is the minimum amount assigned to women. “Many Noom users select the fastest speed of weight loss, which equates to losing approximately two pounds per week,” they said. But you don’t explicitly choose your rate of weight loss up front—the survey takes you through a series of questions and visually shortens your weight loss timeline based on your answers. You can adjust your weight loss speed in settings, but it’s not intuitive, nor is the option foregrounded in the user experience.

“Noom’s calorie budget is not a rigid recommendation but a starting point,” the representative told me. “We’ve been working on the best way to visually represent this philosophy within the platform.”

Noom supplements its calorie tracking with a stoplight-inspired food-categorization system based on caloric density. Calorically dense foods like olive oil, dried fruit, and French fries are red, slightly lighter options like whole-grain bread and grilled chicken breast are yellow, and things like berries, egg whites, and nonfat dairy are green. The app recommends increasing the amount of green foods you eat and limiting red ones. Although it tries to explain that red foods aren’t inherently bad, and acknowledges that a healthy diet includes all three categories, the colors are clearly associated with permission and a lack thereof; from there it isn’t hard to make a leap to thinking of certain foods as good and others as the opposite. Amy Porto, a dietitian and nutrition professor at Messiah University in Pennsylvania, says that thinking about food in such a binary way can be damaging, because it leads to feelings of guilt and shame when someone eats a “bad” food.

Also concerning is Noom’s lack of eating-disorder screening. While a Noom representative told me via email that coaches are trained to be “hypervigilant” and watch for signs that a user is struggling, its initial survey doesn’t ask about eating-disorder history or relationship with food. Alexis Conason, a New York–based psychologist, eating-disorder specialist, and author of The Diet-Free Revolution, has real concerns about this. Many of her eating-disorder clients have tried Noom, thinking it would help their recovery and not realizing that it was in fact a calorie tracker.

“People start the program and find that it’s incredibly triggering,” Conason says. “It goes against everything that the anti-diet movement is about.”

Noom repeatedly points out that it incorporates psychological research to help users lose weight safely and sustainably. The premise of this psychology-based approach is cognitive behavioral therapy, a type of treatment focused on changing people’s thoughts and feelings as a way to change their behaviors. But while CBT is legitimate, Noom’s application of it looks much different than it would in a clinical setting, where a licensed therapist would administer it in ongoing, one-on-one counseling sessions. On Noom, users read short lessons about behavior change and might get weekly messages of encouragement from their coach.

Even a psychologist likely wouldn’t be able to effectively administer CBT through messages in an app, Conason says. And Noom’s coaches are not licensed therapists—instead, they enroll in Noomiversity, a 75-hour “health and wellness coach training program,” after which they clock 200 hours of coaching experience, a Noom representative told me via email. These coaches sign nondisclosure agreements and thus couldn’t speak to me on the record, but several Glassdoor reviews say that each coach is assigned to upward of 350 active Noom users at a time. In comparison, a full caseload for a licensed therapist is typically somewhere between 15 and 30 clients per week.

Like other diets out there, Noom doesn’t lead to long-term weight loss for most people who download the app. In a “learn more” page on the app, Noom cites a statistic that 78 percent of its users lose weight. But that number, which comes from a study of its methodology published in Nature in 2016, is a little misleading, explains Conason. When the authors collected the data, ten million people had downloaded Noom, but the company only pulled data from 36,000 people, because the other 99.6 percent of users quit the app before six months.

There’s not much data to back up long-term weight loss of Noom users, either. Of those 36,000 people, 15,000 were included in a one-year follow-up, less than 0.5 percent of the original sample size, and the data about their experiences is opaque: 38 percent of that small group is missing from the data table, and just 24 percent maintained weight loss for a year.

Despite its popularity and clever marketing, Noom is simply a calorie-counting app with a chat feature and bite-size lessons on eating and weight loss. If you’re set on trying to lose weight—although I’d encourage you to rethink this, as most diets fail and weight loss isn’t necessary for improved health—there are more sustainable paths out there. Consult a registered dietitian and perhaps a licensed therapist, and come up with a plan that is genuinely individualized to your body, your history, and your goals.

seven priorities to end hunger and protect the planet

Wed Sep 1 , 2021
The world’s food system is in disarray. One in ten people is undernourished. One in four is overweight. More than one-third of the world’s population cannot afford a healthy diet. Food supplies are disrupted by heatwaves, floods, droughts and wars. The number of people going hungry in 2020 was 15% […] 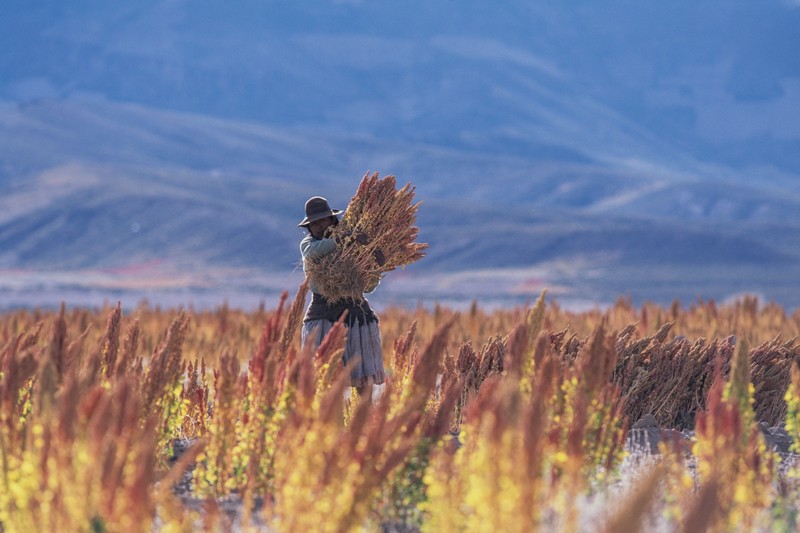