We’re grateful to age—every day in this crazy world is a blessing—but that doesn’t mean we have to like the wrinkles staring back at us in the mirror.

That’s where peptides come in: Think of them as the cheerleaders in your skin-care routine, putting the pep back into your skin to keep it firm and taut.

Very small pieces of protein made up of somewhere between two and 50 amino acids, peptides typically come from plants or are manufactured using biotechnology, and serve as the building blocks of collagen and elastin in the skin. As we get older, the quality of our collagen and elastin—also types of protein—begin to depreciate due to intrinsic factors like the natural aging process, and extrinsic factors like exposure to the sun and pollution. “Peptides can help remove damaged collagen and elastin and then rebuild healthy collagen, elastin and hyaluronic acid to improve skin texture, elasticity and hydration,” Fresno, CA dermatologist Kathleen L. Behr, MD says, noting that they’re good for all skin types. “This leads to healthier, more youthful-appearing skin.”

According to Jan Marini, president of Jan Marini Skin Research, peptides react to specific receptor sites so they can trigger and signal more effective skin functioning, helping skin to act in a younger way. “They’re able to ‘speak’ to cells, so they assist in correcting some of the cellular behavior that has occurred as a result of aging,” she explains. One can only wonder though: Do peptides work more effectively on younger skin with healthier collagen? “Many of the peptides that have a role in helping with collagen do it by fooling the skin into thinking it’s wounded,” says Marini. “So, if you think about how your skin repairs itself when you’re 70 versus 20, it takes longer to heal and the condition of your collagen probably isn’t as good. Theoretically, this means you might not have the same response to peptides at an older age, but they are helpful in skin care regardless.”

In many formulas, peptide molecules are too big to penetrate the skin. “But most often, they don’t need to penetrate to do their work,” says Omaha, NE dermatologist Joel Schlessinger, MD. “Instead, they serve as messengers of sorts, telling the body to naturally produce more collagen and elastin and repair itself.” However, according to Marisa Dufort, director of research and development for Exuviance, smaller peptides with a molecular weight of less than 500 daltons, such as dipeptides, can effectively absorb into surface layers of the skin.

Unlike other buzzy ingredients like hyaluronic acid and niacinamide, which tend to only go by one or two names, peptides are such a broad type of ingredient that many brands tend to market their own trade names. “Using the term peptide to describe every peptide in skin-care products would be like labeling all the toys in a toy store as just ‘toys,’” says cosmetic formulator Stephen Alain Ko. “Developing trademarks can be an easier way for people to understand the specific benefits that a particular peptide in a formula might offer.” One example is Matrixyl 3000, a combination of palmitoyl tripeptide-1 and palmitoyl tetrapeptide-7 that was made by the company Sederma and is currently the most widely used peptide by skin-care brands globally.

In general, peptides play well with a multitude of ingredients, though Ko says most of the skin-care research on peptides tends to look at peptides on their own. Dr. Schlessinger’s perfect pairing for the amino acid chains is retinol, as he believes the two together can deliver complete anti-aging benefits. Hyaluronic acid and vitamin C are other favorable peptide partners, and one of Marini’s top picks is growth factors. “I like this combination because peptides and growth factors do complementary things, and research indicates that peptides can actually help growth factors be more effective.” Dufort notes that antioxidants accompany peptides well, too, because “they bring additional benefits against external aggressors.”

According to Dr. Behr, topical peptide products are also ideal to apply after in-office treatments like lasers because the skin barrier has been “wounded” and peptides are gentle and react well to wound healing.

You’ll often see peptide ingredient names like acetyl octapeptide-3, palmitoyl pentapeptide-4 and palmitoyl tripeptide-38 with prefixes that tell you how many amino acids make up the peptide. For example, ‘tripeptide’ means there are three amino acids. However, Ko says more amino acids doesn’t necessarily make a peptide better or stronger. “The important thing is how it interacts with the skin, which is based on the research of its effects, not its size.” Polypeptides have become increasingly popular in skin-care products as well, and skin-care scientist Rocio Rivera, PhD says these particular peptides contain at least 50 amino acids or more, forming a longer chain. But again, the longer chain isn’t synonymous with increased efficacy.

Carrier Peptides: As their name suggests, these peptides deliver or “carry” beneficial minerals to the skin to help with collagen production. “They are critical to skin health,” says Kate Riley, director of education for NEOVA. “GHK-copper, in particular, supports both collagen regeneration and the growth of new blood vessels in wound healing.”

Enzyme Inhibitor Peptides: These help slow down the breakdown of collagen and elastin in the skin. “In skin care, we look to these to inhibit matrix metalloproteinases (MMPs), a group of enzymes that degrade collagen and other skin proteins,” Riley says.

Neurotransmitter Peptides: “Often labeled on ingredient lists as argireline or acetyl hexapeptide-3, these peptides are more unique,” says Dr. Schlessinger. “They block the release of a neurotransmitter called acetylcholine, which inhibits muscle contraction in a similar way that Botox does. But, don’t expect to get the same results as traditional Botox injections—those are much more effective.”

Copper Peptides: “These are peptides that form a complex with antioxidant-rich copper, which not all peptides can do,” says Ko. They boost collagen and elastin like other types, but Dr. Schlessinger says they are also thought to promote the production of natural hyaluronic acid, and perhaps even help the body with wound healing.

Four peptide-packed products to reach for when firmer skin is the goal.

This gel-like serum tones up crepey skin around the eyes using a neurotransmitter peptide, and the cooling applicator feels so good on puffiness.

Designed to target stubborn expression lines on the face and neck, this potent serum contains eight bio-available peptides, and can be used alone or after neurotoxins.

“We’ve been working on our patented MicroDipeptide229 for eight years,” says Dufort. “This moisturizer helps visibly firm skin, especially on the cheekbones and jawline area.”

At NewBeauty, we get the most trusted information from the beauty authority delivered right to your inbox

Find a NewBeauty “Top Beauty Doctor” Near you

Mon Jul 12 , 2021
Tofu is a protein-rich staple that may lower your risk of heart disease, osteoporosis and cancer. Image Credit: Mizina/iStock/GettyImages Also known as bean curd, tofu is a food made from soybeans that provides a wide range of health benefits. When you include tofu in your diet, it can provide a […] 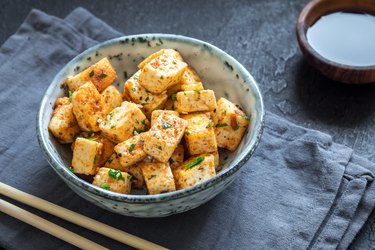