Drug treatment can be affected by significant variability in the degree of response and the occurrence of side effects. Adverse drug reactions are responsible for considerable morbidity and mortality. Sometimes these undesirable effects are intrinsic to the drug, but in many cases they are due to drug-drug interactions.1,2 It is known that drug-drug interactions can trigger adverse effects of medicines that would have been safe if they had not been used in combination. In addition, other substances that are not usually considered pharmaceuticals, like herbal products, may also cause drug-lifestyle interactions. Recognising and managing these interactions can be an invaluable process in achieving safer therapy.

We present a case of a polymedicated patient who was taking apparently harmless substances and dietary supplements and who presented with bleeding and fatigue. This situation was resolved by identifying and managing drug interactions using g-Nomic® personalised prescription software.

At the moment of the consultation, the patient had the following treatment:

The patient’s medication regime was evaluated using g-Nomic® software3 to check for interactions and possible genetic effects. In Figure 1 it is shown all the initial drugs entered in the personalized prescription software.

In addition, the same personalized prescription software was used to check for possible substances that could contribute to interactions even if they are not considered drugs per se, referred to in the software as lifestyle habits. After interviewing the patient about them, it was identified that the patient consumed 3 grams of docosahexaenoic acid (DHA) /day, blueberry and ginger extract supplements, and daily consumption of pineapple juice. In addition, the patient quit smoking nine years ago, and since then has been consuming liquorice ever since to support abstinence. Figure 2 shows the list of lifestyle habits that may interact negatively with the patient’s prescription entered into the personalized prescription software. The physician should ask the patient if he/she takes any of these substances on a regular basis in his/her daily life. If so, the doctor should click on the hyperlink to make this lifestyle habits part of the prescription as a whole.

After evaluating the possible interactions between medication and lifestyle, some measures were taken to avoid those interactions. Figure 3 shows drug-drug interactions as well as drug- lifestyle interactions. Figure 4 shows the possible interactions due to inhibitions and inductions caused by patient’s polymedication. It is known that substances with inhibitory capacity can also impair enzyme activity even in the absence of loss-of-function variants. Therefore, a person who would be classified as a normal metaboliser based on a genetic test alone would experience a phenoconversion to a poor metaboliser when exposed to a strong inhibitor. Similarly, enzyme inducers can increase enzyme activity beyond what a genetic test might indicate. This reasoning can be extended to drug-herb and drug-lifestyle interactions as potential modulators of drug metabolism and thus drug response.

The patient was advised to discontinue the consumption of ginger, blueberry extracts and pineapple juice. The dose of omega-3 fatty acids was reduced from 3g/day DHA to 1g/day. Liquorice was maintained, but the patient was told to minimize its use.

As the patient was already being treated with a beta-blocker to control blood pressure, telmisartan was temporarily discontinued to minimise the side effects of the combination of two antihypertensive drugs.

Figure 5 shows the primary genes to be considered when checking the specific medication for to this clinical case. After assessing all drug interactions, no genetic testing of the patient was considered necessary.

The patient was scheduled for a follow-up evaluation two months later.

At the next visit, there was a clear improvement in both his clinical condition and general wellbeing. The coagulation defects had disappeared with no further gingival bleeding or skin bruising.

Blood pressure was normal (BP: 134/68 mmHg) despite the discontinuation of telmisartan, and it was considered that reinstating the antihypertensive was not justified. Furthermore, glycaemia was also correct (HbA1c: 5.4%) and it was decided to discontinue metformin leaving only Empagliflozin to manage the patient’s diabetes.

The patient’s general condition and well-being had also increased enormously: he did not complain of fatigue and had started exercising outdoors and working out at the gym three times a week.

Drug interactions seem to have been the cause of the patient’s worsening condition, as the improvement was remarkable after addressing the detected potential risks of interactions.

The main concern in this patient was the excessive bleeding. Several factors could have contributed to altered haemostasis, including impaired renal function, which could also explain the increased blood pressure. ASA has an anticoagulant action and may also reduce renal function, contributing to both said problems, and its effects could have been potentiated by other substances. Ginger has hypoglycaemic action, but has also been reported to inhibit thromboxane synthesis, so it may potentially interact with acetylsalicylic acid to potentiate the effects of this drug.4 Berries from the Vaccinium genus contain small amounts of salicylates, and berry juice in large quantities (more than 1L/day) or berry extracts may increase the hypoprothrombinaemia effects of acetylsalicylic acid.5 While 1L a day is too large to be a likely cause of interaction, the patient was taking an extract supplement, which usually contains higher amounts of active compounds than those present on juice or the berry itself. Pineapple juice, which the patient consumed daily, contains bromelain, a substance that can inhibit cytochrome P450 2C9,6 which is the main metabolic pathway for acetylsalicylic acid.7 Therefore, regular intake of pineapple juice could have been an additional factor leading to higher exposure to salicylates.

All of this would contribute to increase the effects of salicylates on both platelet aggregation and blood pressure.

Hypoprothrombinaemia may have also been increased by omega-3 fatty acids, as the patient was consuming large doses of DHA.8

Furthermore, liquorice has been reported to reduce the effects of the antihypertensive medication by increasing liquid retention.9

In this case, none of these products would have been considered dangerous on their own, as they are consumed by a large amount of people without incident. They would have been overlooked unless the personalised prescribing software had reported them as potential risks of interaction with the patients’ medication. The proactive warning prompted the physician to ask the patient about the consumption of these products. Herbal products or extracts used as supplements, such as blueberry extracts, would perhaps have been considered at some point, while consumption habits, such as pineapple juice, would have remained unnoticed.

No specific cause of the fatigue was identified with certainty, but it was likely to be a side effect of the blood loss.

In this case, the extracts the patient used, containing blueberry and ginger, could have contributed to bleeding, in addition to DHA and pineapple juice. These substances in combination were considered a likely trigger for the gingival bleeding.9 It is not possible to know the relative contribution of these substances to the interaction, nor if a clinically meaningful interaction would still have happened without the presence of the whole polymedication. Caution is recommended whenever natural products are used in combination with drugs affecting haemostasis.

The patient’s condition improved as the drug regimen was reduced and simplified, meaning that some drugs may have been unnecessary in the first place. For example, the hypertension could have been secondary to the use of liquorice and salicylate potentiation, and in this case, discontinuation of these substances would have been more helpful in controlling blood pressure than starting telmisartan.

This case report serves to illustrate two concepts: I) the importance of recognizing the interactions of existing compounds in commonly consumed products, in this particular case with anticoagulants. It is therefore advisable to use drug interaction software that take into account lifestyle habits. II) Be aware of the increased risk of drug-drug interactions in patients consuming multiple natural products not considered drugs, which may be the cause of many drug-drug interactions. While being aware of the dangers of polymedication with multiple therapeutic drugs, other substances such as herbal products and dietary supplements, should not be disregarded. Reducing the drug regimen may occasionally lower the amount and severity of drug interactions, provided that the remaining drugs are enough to control the pathology. This work emphasizes the need for personalized approaches for patient empowerment in both clinical settings and home health care.

Consent was obtained from the patient to allow publication of his medical record. The patient was informed that his case of polymedication would be presented as a case report to the scientific community in order to let other healthcare professionals know what his treatment was like and how it has evolved.

The patient signed a consent form to authorise his doctor to record his medical history for the purpose of a scientific publication on his health conditions. He agreed to have his medical records recorded for the named purpose of a scientific publication. No ethics statement from the institution was required, the sole statement from doctor was needed.

Marc Cendrós and Ana Sabater work for EUGENOMIC S.L. and are directly involved in the development of the g-Nomic® the personalized prescription software, but neither they nor anyone at Eugenomic has had any role in the management and clinical evaluation of this case beyond assisting the medical professionals in using the software. In addition, Mrs Ana Sabater has a patent g-Nomic issued to Eugenomic. The authors declare no other conflicts of interest in this work.

Does soy give men breasts? Science debunks a sexist myth about a popular food

Sun Aug 15 , 2021
It’s a quip that would drift through my high school cafeteria whenever I’d pick up vanilla soymilk to have with my lunch: “I can’t drink that,” male friends would say, “It’ll give me boobs.” This reaction seems to be rooted in a twist of fear and misunderstood science. There’s the […] 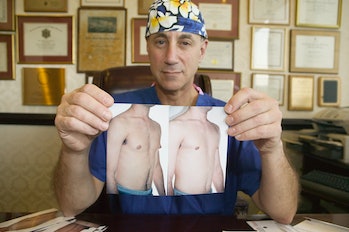