In mid-July, Fiona Jenson-Hitch stood in the Wildcat community garden in Columbia Falls surrounded by students surveying the plots and fruit trees she’d spent two years tending to and using as educational tools.

“I love farm-to-school programs and I really think kids is where access to good food starts,” Jensen-Hitch said. “Kids can get their parents excited and bring home recipes. That’s how you get people excited about food.”

Jensen-Hitch finished up a two-year stint as an AmeriCorps service member with Montana FoodCorps, a national nonprofit organization focused on creating a healthy school food environment through hands-on nutrition and cooking lessons, building and tending to school gardens and striving to change lunch options by championing farm-to-cafeteria programs.

After 15 years, however, FoodCorps is downsizing its national footprint and pulling out of all seven of its Montana sites this year, as well as all sites in Hawaii and North Carolina, leaving schools scrambling to continue gardening and educational programs.

Montana FoodCorps was founded by Chrissie McMullan in 2006 after she started a farm-to-table program at the University of Montana in partnership with the National Center for Appropriate Technology and Montana Campus Connect.

The Montana FoodCorps model of crafting farm-to-cafeteria and nutrition education programs in schools was used by McMullan to help co-found a national FoodCorps program as part of the federal AmeriCorps Service Network, launching in 10 states with 50 workers in 2011.

“Montanans launched FoodCorps as a creative way to meet local needs,” said McMullan, who hasn’t been involved in the program for six years, in a statement to the Beacon. “I’m sad that the national recourses are no longer available, but I am hopeful that the can-do spirit of Montanans will shine once again to keep getting healthy, local food to Montana kids.”

In the early years of FoodCorps as a national program, one of Montana’s sites was the Northshore Compact, a shared program between Cayuse Prairie, Lakeside, Somers and Bigfork.

“I’m really sad to hear FoodCorps is over because they were such an impact on our community,” said Amy Piazzola, superintendent of Cayuse Prairie School District. “I think what I most loved about FoodCorps was their help getting a hot lunch program in the school, showcasing the harvest of the month and bringing awareness of good food to our students. It was such a blessing.”

Sue McGregor, a family and consumer science teacher at Bigfork Elementary School, said her schoolapplied to be a FoodCorps site in 2012 after seeing the success of the program in Ronan.

“We believe in teaching kids where their food comes from and we wanted to build it into the structure of the school,” McGregor said. “We had a gardening and food club, and the students thought it would be a great idea to build a garden. We didn’t think a goal of production was feasible, but we wanted to focus it on the education program.”

Bigfork built its student-designed garden in 2012, and from 2013-2018 four different FoodCorps service members helped maintain the garden while teaching nutrition and gardening lessons in the classroom.

“With the way kids are these days connected to their screens all the time, there’s something magical about growing their own food and flowers in nature,” McGregor said. “They just love it.”

The Bigfork garden has 10 raised beds that offer each class the opportunity to create a theme, decide what to plant and implement into the curriculum.

McGregor said kindergarten classes have planted pumpkins and learned how seeds grow, and the first-grade class this year planted a potato soup garden that has onions, celery, carrots and potatoes.

“A garden can be used as an outdoor classroom and can be tied to almost any academic area,” she said. “Growing a school garden fosters community, it teaches kids where there food comes from and gets them in nature, and it encourages them to try new whole foods and enhance their diet.”

At Cayuse Prairie, the school designated a part-time horticulturalist to focus on the program, and all teachers are encouraged to teach food science lessons and remain active in the garden. In addition, there is a community greenhouse garden committee, which helps with the maintenance of a heated greenhouse that two FoodCorps members helped fundraise for and make a reality.

“Our FoodCorps members brought in energy and a mindset towards food education that we didn’t want to go away,” Piazzola said. “We took the time to make sure what they started would continue and be sustainable.”

In Columbia Falls, the school district built a garden next to the junior high in 2013 and applied to be a FoodCorps site a few years later.

Jensen-Hitch started working in Columbia Falls in 2019, the fourth service member at the site. When she arrived, the garden was thriving and half of it had recently been planted as an experimental 47-tree orchard.

“It really started producing my first year, which is really exciting,” Jensen-Hitch said. “I knew pretty early on that I was going to stay on for a second year.”

For much of Jensen-Hitch’s second year, a big part of her focus was on a partnership with Farm Hands Nourish the Flathead (FHNF), a local nonprofit that works to make farm-fresh food accessible to everyone in the Flathead Valley. With the impending departure of FoodCorps in Montana, FHNF will be taking over the programming at the Wildcat Garden and providing summer camps for local kids.

Pratt previously served two years with FoodCorps at the NorthShore Compact site — she was one of the members responsible for launching the Cayuse Prairie greenhouse — and is an advocate for any partnerships that keep school gardens and education programs front and center.

Pratt says that putting the impetus on teachers to emphasize nutritional education and working in a garden is hard and not always a model for longevity. She added that it was fortuitous timing that the FHNF partnership came together as FoodCorps announced it was suspending the Montana program.

“An interesting part was that FoodCorps made it sound like it was a decision being made financially and about who’s being serviced demographically,” Jensen-Hitch said. “It was kind of communicated like Montana wasn’t serving a highly diverse population, which is not true. We’re the state with the highest Indigenous population, and they also pulled out of Arizona [last year], which is similar.”

Montana FoodCorps has operated sites that served multiple Native American communities, including in Polson, Ronan and Hardin, as well as operating in many rural and low-income areas.

“At the center of this decision is a recognition that in order to ensure FoodCorps’ financial and operational sustainability, embody its commitment to equity, and strengthen its broader impact as an organization, it must invest its resources in a more focused way,” FoodCorps CEO Curt Ellis wrote in a statement to the Beacon. “These reductions to the breadth of FoodCorps’ reach will allow the organization to invest in stronger support for local and BIPOC recruitment, alumni engagement, and policy advocacy. These decisions will also enable FoodCorps to make important investments in equity … making continued progress toward paying FoodCorps service members a living wage.”

The loss of FoodCorps service members will be felt at schools and communities across the state, but McGregor, Piazzola, Jensen-Hitch and Pratt all believe that they have successful examples of how to transition sites from FoodCorps operations to local partnerships or in-school programs.

“If there isn’t a farm-to-school champion in the school, if you don’t have someone actively fighting for it and funding it, it just goes away,” Pratt said. “We want to make sure kids get the food education that’s been happening for so long. They need to have access to a garden to make sure they know carrots grow in the ground.”

To learn about volunteer and donation opportunities at local farm-to-school programs in the valley, visit the Bigfork garden fundraiser page, and Nourish the Flathead.

Too Few Hospitals In COVID Hotspots Are Equipped To Offer ECMO : Shots

Wed Sep 8 , 2021
ECMO is the highest level of life support — beyond a ventilator, which pumps oxygen via a tube through the windpipe into the lungs. Instead, the ECMO process basically functions as a heart and lungs outside of the body — routing the blood via tubing to a machine that oxygenates […] 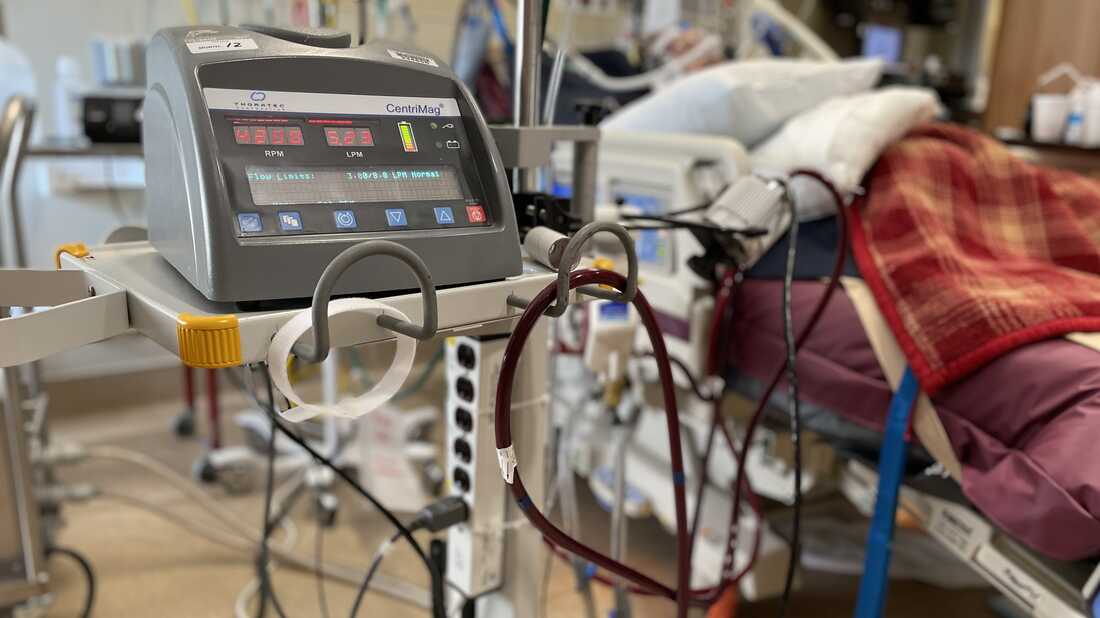