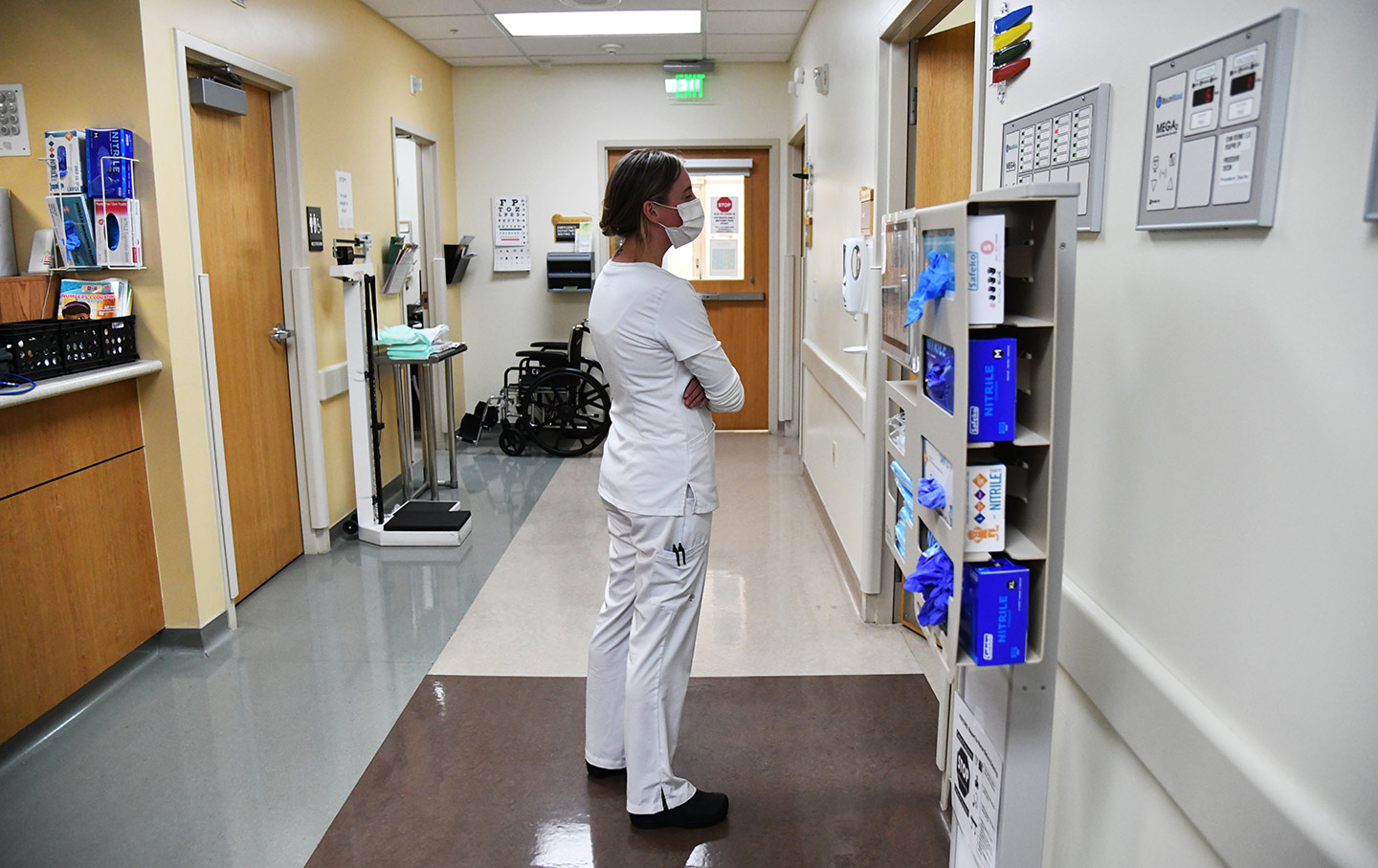 Thank you for signing up for The Nation’s weekly newsletter.

Thank you for signing up. For more from The Nation, check out our latest issue.

The Nation is reader supported: Chip in $10 or more to help us continue to write about the issues that matter.

Did you know you can support The Nation by drinking wine?

Pope Francis emerged onto a hospital balcony in Rome where he is recovering from colon surgery on Sunday and declared that he had “experienced once again how important good health care is—accessible to all, as it is in Italy and in other countries.”

Yet, here in the United States, multibillion-dollar health systems affiliated with the Catholic Church are at the center of a trend in rampant consolidation that threatens to drive up patient costs and restrict reproductive and gender-affirming services, making health care even more inaccessible for many. During Covid, the nation’s largest health systems benefited from billions of dollars in federal relief intended for struggling hospitals. Systems like Providence Health Services that boast their own venture capital funds, sit on billions of dollars in cash, pay their CEOs millions, and yet are nonprofits exempt from taxes managed to survive or get even richer even as a record number of rural hospitals closed. Meanwhile, patients, especially people of color already facing the deadliest impacts of Covid, faced soaring medical debt.

Providence, the lead example in a New York Times investigation that revealed how wealthy systems benefited from Covid bailouts, is affiliated with the Catholic Church, with a mission of serving the poor “as expressions of God’s healing love.” Such hospitals follow directives that restrict abortion, contraception, sterilization, in vitro fertilization, and physician aid-in-dying, and have denied hysterectomies to transgender patients and delayed care to miscarrying women who have almost died as a result. In recent years, as consolidation has forced many hospitals to close, Catholic health systems have expanded their reach to control one in six acute-care beds. Ample research has shown that such mergers lead to rising costs for patients.

Now, grassroots groups are fighting back.

In Oregon, where Providence is the largest health care system in the state, a coalition led by organized labor and reproductive health groups have won passage of a landmark bill to protect reproductive and gender-affirming health care services when provider entities merge. The Equal Access to Care Act, HB 2362, requires insurers and hospitals above a certain size to demonstrate that mergers and certain other transactions will reduce rising patient costs, increase access in medically underserved areas, or otherwise improve health outcomes in the state. Deals that could involve a loss in essential services, including reproductive and maternal health care, may trigger an in-depth review by the state and a board that includes affected residents and consumer advocates. The board would hold public hearings and make a recommendation to the Oregon Health Authority about whether it should deny or approve the deal or allow it with conditions in place. As the pandemic ushers in a new wave of mega-mergers, New York and the Biden administration have also taken aim at the rising costs associated with hospital mergers, but advocates say Oregon’s law is the first to explicitly address reproductive and gender-affirming health care access.

“When you look at mergers and acquisitions, all of the data, all of the academic research shows that they drive costs,” said Felisa Hagins, political director of SEIU Local 49, part of the coalition behind the bill. “What makes this unique is we wanted to make sure that mergers didn’t limit essential services that Oregonians have really confirmed over and over and over again.”

Oregon was the first state to allow medical aid in dying, and 64 percent of voters rejected an anti-choice effort to ban abortion coverage under Medicaid in 2018. Yet close to a third of the state’s acute-care hospital beds are in a Catholic facility where abortion, gender-affirming care, and end-of-life care are restricted. (The final version of HB 2362 does not include explicit protections for end-of-life care.) In 2017, when Oregon passed the Reproductive Health Equity Act to require insurance coverage with no out-of-pocket costs for contraception, abortion, and vasectomies, Providence threatened to pull out of the state’s health insurance market if it were forced to comply. It was granted an exemption from the law.

“To have one of most progressive, pro-choice reproductive health policies in the nation, which was specifically designed to expand access to entire suite including abortion care but then to allow systems to diminish that access, it just contradicts itself,” said Oregon state Representative Andrea Salinas, lead sponsor of HB 2362. Salinas said the goal of the legislation is not to prevent mergers involving Catholic health systems like Providence but to ensure that there is a strategy to maintain services when they do happen. Still, anti-abortion organizations like Oregon Right to Life have decried her bill as a “direct assault” on religious hospitals. That has led to concern among advocates about a legal challenge that could wind up before a Supreme Court willing to grant unprecedented leeway to discriminate on religious grounds.

“I keep hearing, ‘Well, this is going to put a damper on these kinds of transactions.’ Well, it doesn’t have to,” Salinas said. “You have a choice, Providence.”

Dr. Helen Bellanca, a doctor in the state, said she hopes the legislation will help protect patients like the Latinx farmworkers she served at a clinic in Hood River, east of Portland. Two decades ago, Providence took over the only hospital in the community, which is home to workers who harvest the area’s bountiful supply of pears, apples, and cherries. Within a few years, Providence declared that elective tubal ligations must stop, Bellanca said.

“The story that we got was that the local bishop had caught wind of the fact that a Providence hospital was providing elective tubal ligations and asked them to tighten that down a little bit,” Bellanca said.

Many of Bellanca’s undocumented patients relied on a federal policy that would cover their tubal ligations only if they were performed right after they gave birth, because delivery was covered as an emergency cost. For patients undergoing a C-section, having a tubal ligation at the same time spared them the risks and expense of a second surgery. If the hospital stopped allowing tubal ligations, there was nowhere else for these patients to go, Bellanca said.

“There was a lot of back-and-forth negotiations, and in the end tubal ligations were allowed to continue, but not without increasingly onerous documentation of medical necessity, and it was never quite clear what that meant,” she recalled.

“So many alarm bells went off,” Christel Allen, executive director of NARAL Pro-Choice Oregon, said. “The idea of the scale and scope of that merger, the number of people who would be impacted and just the sheer size of Providence following that type of merger, it was very concerning.”

NARAL banded together with the ACLU, SEIU Local 49—a union that represents health care workers, including those at Planned Parenthood in the state—and grassroots organizations dedicated to racial equity, LGBTQ rights, and end-of-life care.

“For years, Providence has been allowed to put religious views ahead of patient health, limiting access to the full range of care and impacting our ability to make personal decisions with providers that is best for our health,” they wrote. “It’s clear that this corporation is at odds with Oregon values and we are deeply concerned that a merger with CareOregon will only hurt Medicaid patients who already face barriers to healthcare.” They vowed that they would “not rest until access to care is guaranteed for all of us at risk.” Two weeks later, the deal was called off over a difference in “operating principles.”

This same coalition reunited to press the Oregon legislature to pass HB 2362. Governor Kate Brown is expected to sign the measure after it passed both houses in June.

On Friday, in a parallel victory, the Biden administration issued a sweeping executive order that takes aim at monopolies across sectors including health care, instructing the Justice Department and the Federal Trade Commission to revise their guidelines for hospital mergers to ensure that such deals do not harm patients. Biden’s head of Housing and Human Services, Xavier Becerra, took a close interest in hospital mergers involving religious hospitals when he was California attorney general, imposing landmark measures to protect reproductive care and prevent anti-LGBTQ discrimination in a merger between Dignity Health and Catholic Health Initiatives.

But amid gridlock in Congress and with a conservative anti-abortion majority on the Supreme Court, advocates in states like Oregon and New York see the greatest potential for progress at the local level. In New York, a coalition of 70 organizations has come together to urge Governor Andrew Cuomo to sign legislation similar to the measure in Oregon that would require an assessment of the impact of health care transactions on affordable care to medically underserved patients, including low-income patients, women, and LGBTQ people.

“In New York, in particular, the driving impetus behind this bill was the recognition that the very communities hardest hit by Covid-19 are the places where there just aren’t enough hospital beds in part because of the impact of consolidation,” said Lois Uttley, women’s health program director at Community Catalyst and a leading proponent of the bill. “I think these two bills are the leading edge of concern at the state level about the impact of rampant hospital consolidation on access to care and the cost of care, particularly in light of Covid-19.”

The science behind toxic inequities in beauty and personal care products

Mon Jul 19 , 2021
Jennifer McPartland, Ph.D., is a Senior Scientist with the Health Program. Prominent incidences of environmental injustice in the public eye are typically place-based — from lead-contaminated tap water in Flint, Michigan to smokestacks lining Cancer Alley in Louisiana. For decades, communities of color and low income communities have confronted long-standing discriminatory […]