Among the age-old challenges of parenting and child-rearing is getting the young ones to eat their vegetables — and a new study offers a simple trick to get kids to eat more.

In a four-week experiment on 67 kids aged from 3 to 5 years old, researchers found out that a simple trick resulted in kids eating up to 68 percent more vegetables on average: serve larger portions.

Researchers from the Departments of Food Science and Nutritional Sciences at the Pennsylvania State University published their findings at the Appetite journal. The report is titled “Promoting vegetable intake in preschool children: Independent and combined effects of portion size and flavor enhancement,” set to appear on the September 2021 print issue of the journal. 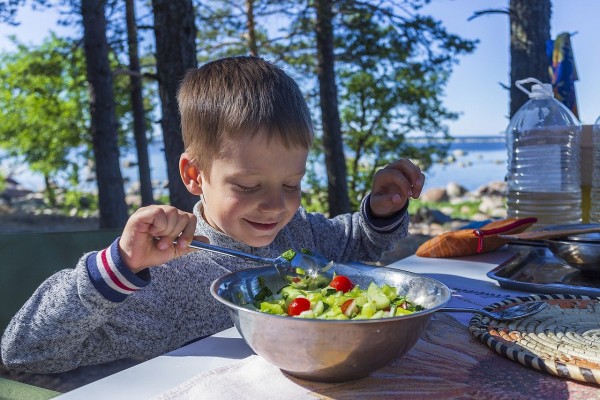 ALSO READ: What You Should Eat To Get Optimum Nutrition Daily

Solving the No Vegetable Conundrum

In their study, researchers used broccoli and corn as the vegetables to test their theory, doubling the amount they serve the kids from 60 grams to 120 grams to see how the kids would react to it. It led to an additional consumption of 21 grams, or about 0.74 ounces of vegetables a day.

“The increase we observed is equal to about one-third of a serving or 12 percent of the daily recommended intake for young children,” said Hanim Diktas, a nutritional scientist from Penn State, in a university press release. She adds that their strategy of serving larger portions could be useful to parents, caregivers, and teachers working to encourage kids to eat the recommended amount of vegetables in a day.

Similarly, a 2010 study published in The American Journal of Clinical Nutrition notes that the same strategy of serving larger portions of vegetables also increases average consumption in adults. The experimental design in this study involved two groups of adults exposed to varying portion servings of grain, meat, and vegetables.

A “But” In The Larger Portions Strategy

However, the vegetable eating trick is not as simple as simply adding more vegetables to every meal. Considerations on the type of vegetables, the foods that they come with, and the volume of vegetables with respect to the portion sizes of other foods served all appear to affect the kids’ response.

In the new study from Penn State, researchers tried to add butter and salt in the servings. However, it did not have a significant impact on the volume of vegetables eaten by the kids, regardless of the portion size in general. It should also be noted that the portion sizes of other food materials were not changed in this study.

One possible angle researchers look at was that the vegetables in question were already well-received by the kids even without salt and butter added. In the survey conducted, about 76 percent of the kids rated the vegetables as “yummy,” or at least “just okay”. Additionally, researchers noted that the food choice should be taken into consideration. Together with corn and broccoli, the meal included rice, applesauce, fish sticks, and milk.

According to Barbara Rolls, also a nutritional scientist from Penn State and a co-author in the study, they chose food that were “generally well-liked” but not the favorite food of the kids. She noted that if, for example, they offered vegetables together with chicken nuggets, “you might be disappointed”.

RELATED ARTICLE: Why After Recess Is The Best Time To Serve Kids Veggies

Check out more news and information on Healthy Diet in Science Times.

Thu Jul 1 , 2021
By the year 2026, the nootropics market is expected to reach a valuation of $5.32 billion. Of all the nootropics on the market today, bromantane is one of the most popular. Have you ever thought about giving it a try? If so, read on to learn everything you need to […]